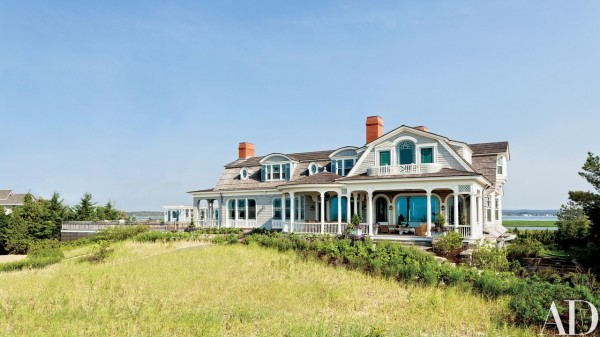 A standing-room-only crowd gathered in the Great Hall of the venerable Metropolitan Club in New York City last December as the Stanford White Awards, created by the Institute of Classical Architecture and Art, were conveyed. (Fittingly, White designed the clubhouse in 1894). In the tristate region, honorees included the architectural duo of Cynthia Filkoff and Armand Di Biase, cited for their design of a temple-like columned pool house with fireplace on a 120-acre estate in Millbrook, New York. Their client, a shipping magnate and ardent Anglophile, had dispatched them to England to study the work of Robert Adam, the great neoclassicist. Trained in modernism at Syracuse University, they found themselves sketching festoons—garlands and swags—and studying proportion and detailing as they immersed themselves in the language of classicism.

With 15 chapters from coast to coast, regional awards ceremonies culminate with the national Arthur Ross Awards in New York, a black-tie gala event for which submissions have increased by 100 percent since 2015. Honorees have included H.R.H. the Prince of Wales. “The Institute advances classicism in a vigorous way, but it is somewhat an uphill battle,” says leading architect Robert A.M. Stern, who stepped down in 2016 as dean of the Yale University School of Architecture after 18 years and is at the helm today of his 300-member firm, RAMSA. “Modernism is of the moment, and that moment passes every day.” He suggests that classical building are far more poetic and time honored, with a vocabulary dating back to ancient Rome and even Greece, than the provocative and individualistic metal-and-glass buildings of modernism. (ICAA will premiere a new documentary film on Stern, Robert A. M. Stern: Always a Student, in October.) 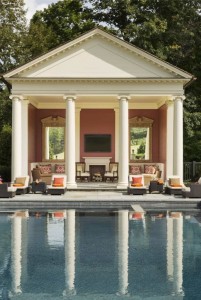 “We are making progress,” says ICAA president Peter Lyden, who grew up in England and today also serves on the board of Blenheim Palace. He notes that 18 U.S. universities were represented in a recent summer studio offered at the institute. He is also working with the Prince’s Foundation to inaugurate drawing programs in London, augmenting those already established in Rome and Paris. In leading the classical groundswell, he points to a novel ICAA project: a recent documentary featuring renowned film director James Ivory at his Hudson River home and illustrated with clips from the classical sites featured in Merchant Ivory productions. Among those included are Versailles (Jefferson in Paris) and Florence, Italy (A Room with a View). “The buildings become characters in his films,” says Lyden. The ICAA also sponsors an exciting array of lectures and travel programs offering a rare opportunity to visit and meet the owners of great houses, villas, and châteaux around the world. An upcoming trip on Irish Georgian architecture, with a stay at the newly restored Ballyfin, is sold out. 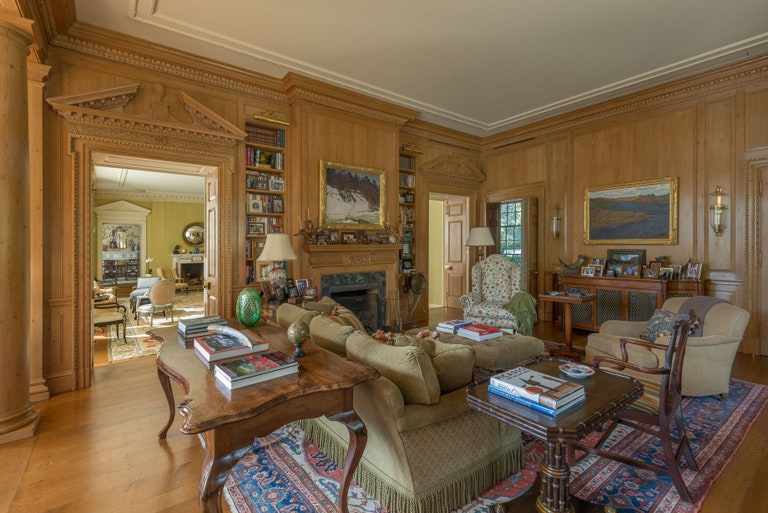 “We are always trying not to copy the past, but to interpret it and reinterpret it as artists often do,” continues Stern. “Classicism is part of my DNA, although I was reared in modernism at Yale in the 1960s,” he says. Early on, he was inspired by the classical work of Sir Edwin Lutyens, which culminated in the Viceroy’s Palace in New Delhi. An exploration of the “shingle style” was his “first serious foray as an independent architect,” he adds, noting that the late architectural historian Vincent Scully, his teacher at Yale, named the style, so prevalent in the vernacular of New England and Long Island. “It is the bedrock along the shore,” he says. Having reinvigorated the style, he finds the “glass boxes” being built in the Hamptons as not offering the “strong dialogue with the sea, with the air, with the sun and shade that the shingle style has built into its DNA.”

Architect Peter Pennoyer looked to Palladio, Robert Adam, and Benjamin Henry Latrobe when designing Drumlin Hall for a client in Dutchess County, New York. “I wanted to take classicism into an American version,” he says. “It is unlike the plan of an English country house or Italian villa—the rooms are open.” The siting was magnificent, and the house takes it name from the Drumlins, or surrounding small hills. He walked the land with the client, siting the country house on a saddle of land between a valley and a meadow. “The land suggested the siting: We wanted it with views and to look settled into the landscape.” 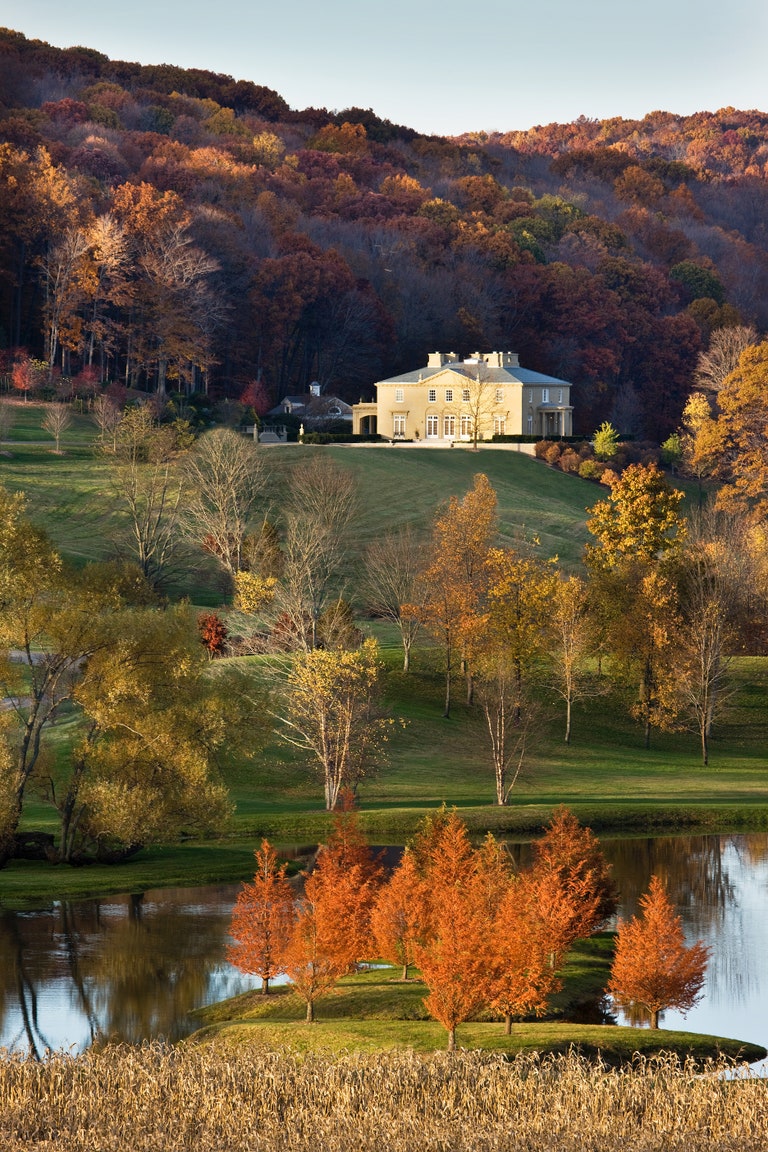 Inspired in part by Palladio, Drumlin Hall is sited in a landscape of small hills or drumlins in Dutchess County, New York.

Although Pennoyer thinks it’s interesting to look at how 20th-century architects have approached classicism, he suggests starting at the roots. Indeed, among his most prized possessions is an 1684 edition of Vitruvius: The 10 Books on Architecture, the early bible for classicists, which he purchased, with the help of his parents, shortly after graduating Columbia. It was published in French by Claude Perrault, architect of the east facade of the Louvre. “Thomas Jefferson owned a copy of the book, and you can see it in the details at Monticello,” says Pennoyer, who was majoring in French literature prior to his transfer into architecture at the suggestion of his mentor, Robert Stern, then teaching at Columbia.

A beautifully proportioned room with moldings is visceral—a delight to the eye and a wonderful experience.

Kevin Clark of Historical Concepts also looked to Palladio when designing a fresh take on the ante-bellum South inspired by Oak Alley, the famed Louisiana plantation. Serenity, as the owners named it, is sited on 30 acres along the May River, north of Savannah. He looked to Palladio for inspiration in designing the massing of the main formal spaces and then of the wings. “The clients took great comfort in the high styling and detailing,” he says. He studied at Notre Dame, when he believes it was the only school offering classical training in the U.S., complimented by a year of study in Rome. “The grand staircase is a key element—a fulcrum to the house and a gathering spot,” he notes. The owners like to start their entertaining there.

In designing a northern California stone house for clients who wanted to make a grand yet livable house for four children, Eric J. Smith—who collaborated with legendary designer David Easton for 25 years—looked to Irish Georgian houses and also old stone houses of America. An abandoned old quarry in Connecticut was the source of stones with a rich patina. He points out that classicism embraced the use of natural light and the prevailing breezes. “An enfilade of natural light connects one room to the next,” notes Smith. The paneled library is a masterpiece of wood carving. And indeed, Smith suggests that craftsmen are unsung heroes in classicism. “We are not embracing the role of the craftsman as much as we should,” he says. 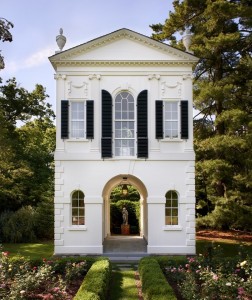 This garden folly, or Summer House as it is called, is set amid a Lake Forest, Illinois, rose garden. It was inspired by the work of Samuel McIntire and designed by Phillip J. Liederbach of Liederbach and Graham Architects, Chicago. Photo: Tony Soluri

Adler’s work, along with that of another American, Charles Platt, resonates with Gil Schafer III. The contemporary classicist’s most recent book is titled A Place to Call Home: Tradition, Style and Memories in the New American House (Rizzoli NY, 2017). Schafer, who served as president and then chairman of the ICAA for more than a decade, looks for inspiration to architects, well versed in the classical idioms, who advanced gracious living. Beauty and delight, as espoused by Vitruvius, are also part of his lexicon. A beautifully proportioned room with moldings is “visceral—a delight to the eye and a wonderful experience,” he says. “Architecture is about delighting the soul.”